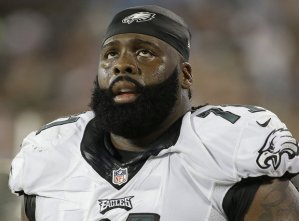 Philadelphia, PA – Nearly a full day since Eagles lineman Jason Peters addressed the media after training camp and levied several harsh statements about previous head coach Chip Kelly, the tiny microchip that had been implanted in Peters’ spine by Kelly physicians three seasons ago has not stopped sending violent electric shocks through his system.

On Thursday after training camp concluded, Peters told reporters he was happy to see new head coach Doug Pederson bringing back the Andy Reid system to the organization, and he further stated that if veterans stood up to Kelly in the past they would be let go.

Twenty-minutes after his comments the electrical shocks began, nearly paralyzing the behemoth lineman, who luckily had already driven home.

Peters was found this morning laying in the kitchen of his home by an Eagles intern who had been dispatch to see where he was, urine everywhere, begging for the shocks to stop.

Most members of the Eagles roster still have the chips implanted somewhere in their bodies, an organization media representative stated. Several have been able to be removed after an intense, five-hour surgery, but the majority go undetected in the athletes’ bodies.

“No medical doctor I know of would intentionally implant a microchip to be undetectable in someone’s body. It’s grossly unethical and goes against everything the American Medical Association (AMA) stands for in modern medicine…not to mention the Hippocratic Oath,” the organization rep stated.

“Jason’s is embedded about an inch into his spine, between the L1-L2 vertebrae. No surgeon will touch it.”

At press time, sources confirmed Chip Kelly was seen holding a remote control with a large red button for most of Thursday, but said it was just his garage door opener.