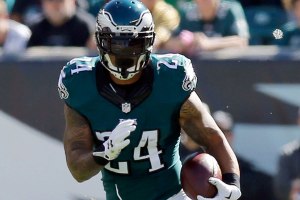 The oft-injured Ryan Mathews is having his best start to a training camp ever.

Philadelphia, PA – Running back Ryan Mathews expressed his positivity to reporters this morning about his status in training camp, noting that a sprained ankle before the official start of camp is a personal best for the oft-injured Eagles running back.

Mathews reportedly sprained his ankle TRAINING for training camp last week and will likely miss several days after being placed on the non-football injury list.

It’s the best start to a season he’s ever had in term of an injury, Mathews told reporters.

“I’m very happy with where I am right now. Just a twisted ankle? This is fantastic. Much better than the last several years. This is going to be a great season,” the ecstatic athlete said.

In 2015, Mathews opened up his first Eagles training camp on the physically unable to perform list after picking up a 2-month-old, 9-pound cousin at a family barbecue and immediately tore every ligament in both shoulders, and somehow sprained both MCLs in his knees as he fell to the ground and missed the entire training camp.

In 2014, Mathews suffered a concussion after walking down a street in downtown San Diego, where he was struck in the head with a window washers bucket that hat plummeted from the 21st floor of a hotel. He missed the entire training camp.

In 2013, Mathews missed 16 out of 17 days of training camp after he was diagnosed with a flesh eating bacteria after swimming in a friends particularly dirty backyard swimming pool. He was slated to come back for the last day of camp, but missed out after accidentally poking his eye with a toothbrush while brushing his teeth.

He also missed training camp time for the following reasons:

A strained ankle, he said, is the best case scenario.

“Just fantastic. I should be fine in a few days, really looking forward to it,” Mathews told reporters as he walked to his car at the NovaCare Complex.

At press time, sources confirmed an out of control 12-ton, 18-wheeler hauling training camp equipment was hurtling towards Mathews’ parked car, who couldn’t free himself due to a stuck seat belt.