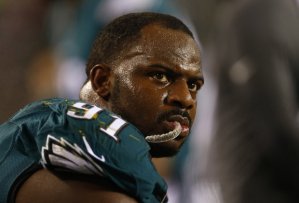 Should the Eagles give in to his new contract demands?

The star Philadelphia Eagles defensive lineman Fletcher Cox has made a point of not attending voluntary OTA workouts this off-season as continues to lobby the organization for a new, more lucrative contract.

The extraordinarily talented defensive lineman is still playing under his initial contract and certainly believes he has played himself into a newer, more expensive deal.

Cox has remained fairly silent throughout his holdout, but has published a number of Tweets that may allude to his disappointment with the team.

And the clock is still ticking ..

Despite never publicly mentioning anything about his squabble with the franchise, a number of Fletcher Cox’s contract demands were reportedly leaked to the media today and gives a fascinating incite into what the young superstar is asking for his next deal.

Cox is obviously asking for more money (millions in guaranteed money as well) but has also asked for several special perks to stay with the Eagles.

Aside from money, here is what Cox is asking to be included in his next deal:

So what do you think? Is he worth these demands?