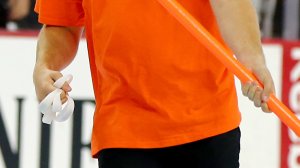 A member of the Philadelphia Flyers ice crew cleans up wristbands thrown on the ice during the game 3 loss.

Philadelphia, PA – Following several incidents during game 3 where fans threw pre-game giveaway bracelets onto the ice, Flyers front office representatives are re-thinking their decision to hand out Ed Snider commemorative paperweights to each fan attending game 4 of the NHL playoff matchup against the Washington Capitals.

“Maybe we didn’t think this through. These are kind of heavy, aren’t they? Pretty solid. And the corners cut into these? They could do so some serious, serious damage,” said Joe Heller, senior director of marketing for the Flyers.

Heller picked one up in his hands, weighed it, and then cringed.

“One of our interns dropped one and it shattered into thousands of tiny shards. A janitor really sliced up his hands trying to clean it up, they were really sharp. Fuck me.”

Heller noted that he never thought fans would throw the wrist bands distributed before game 3, but hoped that they would realize their actions would be caught on television and further tarnish the reputation of Philadelphia sports fans if they hurled the paperweights onto the ice during the Flyers inevitable loss in game 4.

At press time, Heller said it was a probably a good thing that the organization nixed his idea to give out Ed Snider commemorative throwing darts.