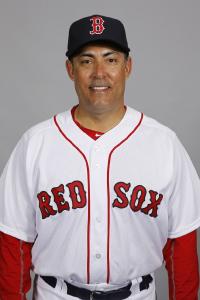 Boston, Mass. – Citing his recent poor performance as a first base coach, Boston Red Sox GM Mike Hazen said a decision has been made to demote Ruben Amaro Jr. to the position of bat boy for the first month of the season.

“We hope Ruben will gain some much needed experience and we’ll evaluate his status with the team after April,” Hazen said.

When asked what led to the demotion, Hazen said it was several moments during Spring Training that stood out to the organization, namely Amaro’s habit of defending his decision to not use advanced statistics during his tenure as the Phillies GM.

Amaro Jr. was so distracted during key points of several games he would reportedly forget how many outs there were in an inning and would convey false information to base runners.

“He was constantly talking to our players about how the only thing that matters in the grand scheme of things is batting average, RBIs, and home runs for hitters and wins and strikeouts for pitchers. Not only is that a categorically untrue belief, he would talk about it to our players DURING a game. Pedroia got picked off twice in one game because Ruben would not stop lecturing him about how walks stopped hitters from getting in their necessary swings,” Hazen said.

“We just couldn’t have him in a position of leadership with the Red Sox.”

Amaro Jr. seemed to be taking the demotion with good charm, as he noted that his heart soared the first day David Ortiz tussled his hair after he gave him his favorite bat during the first inning of a spring training matchup against the Minnesota Twins.

At press time, Hazen was considering firing Amaro altogether after he mistakingly gave Xander Bogaerts a nine-iron when he walked up to bat.