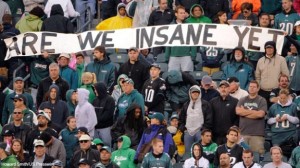 I would say we are, yes.

2015 is the worst year I can remember experiencing in this city. The Phillies lose close to 100 games, the Eagles miss out on the playoffs with one of the most HATEABLE rosters in franchise history, the 76ers are historically terrible, and the Flyers are far and away the only bright spot in the city and they’re three games over .500.

It has not been a great year for sports in this city.

Does anyone else remember an Eagles roster as irritating as this year’s? I guess the 2011 “Dream Team” roster gives them a run for their money, but this year we had to deal with DeMarco “slippery fingers” Murray, Sam Bradford hobbling his way through the first 14 weeks of the season, and our starting guard criticizing Eagles fans for DARING to boo a team that had just lost 45-17 to the Tampa Bay Bucs.

Oh, and then the team lost a national game on Thanksgiving by more than 30 points the next week. THE NEXT WEEK. Nobody had time to process the first horrendous loss (and thoughts of suicide) before going through it against less than five days later.

It’s like getting diagnosed with brain cancer and then your doctor calling you five days later saying you also have full blown AIDS. You didn’t even have time to process the cancer, now you have to deal with full blown AIDS?!

I mean, it just skipped right over HIV and leapt into AIDS, it’s the damndest thing. On top of cancer!

That’s what being a sports fan in Philadelphia was like in 2015. Cancer AIDS. Massive amounts of it.

It has been a horrible year. Just horrible. Chip Kelly is braindead, Ryan Howard eats fetuses for their hGH enriched enzymes (the science is spotty at best), and the 76ers are so terrible the league forced them to “improve” by hiring a 95-year-old front office executive who has never won anything in his life.

Ryan Howard managed to keep himself relevant by being linked to hGH to close out 2015. He would officially become the most lackluster player to ever be busted for hGH, narrowly edging out Jeremy Giambi.

Really think the point of taking performance enhancing drugs is to, you know, actually ENHANCE your performance, Ryan.

And there’s still a week left in 2015! What else can happen to pitch this city further into the darkness? Maybe Al Jazeera can release that story they’ve been sitting on about how Chase Utley’s charity, The Utley Foundation, has just been a massive front for a worldwide dog fighting ring that would put Michael Vick to shame?

Hey, maybe Shayne Gostibehere will get arrested in a sting of an international drug smuggling ring and get 25-years to life in a maximum security prison! There’s still four more days left in 2015!

God damnit this year has to end soon, my heart can’t take anymore disappointment. These teams and these athletes have no idea what they do to this city, do they?

They don’t listen to sports talk radio, they don’t watch CSN, and they don’t read sports blogs (other than ours of course) so they have no clue.

Cue Claude Giroux being indicted for manslaughter in 3…2…1….