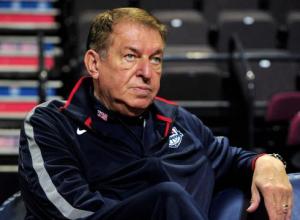 Full of vim and vigor.

Philadelphia, PA – Jerry Colangelo, the new Chairman of Basketball Operations for the Philadelphia 76ers, announced he will take great care in turning around the franchise that has been the subject of heavy criticism around the league.

Colangelo also announced he would take a three-hour nap from noon to 3 p.m., enjoy a lovely early-bird dinner at 4 p.m., and be ready for half-an-hour of work before calling it a night at 5:30 p.m.

“The Early Bird over at Schnitzers is just to die for. $12 and you get a salad, two sides, half of a sandwich, and a personal pie for dessert. You even get a soda for just a nickel with the special. Can you believe that? No sweet iced tea though, that’s not part of the special, but soda for just a nickel!” An excited Colangelo said, as a nurse attempted to calm the over stimulated NBA executive down.

Colangelo has already made several changes since being hired by the Philadelphia franchise. He reportedly invested in a gross of tennis balls and ordered several interns to cut them in half and to affix them to the underside of his walker.

When asked if he thought that type of a daily schedule might be difficult for other NBA executives to adapt too, Colangelo scoffed at the notion.

“Who can stay up until all hours of the night? If someone wants to reach me they can call me when I get up every morning at 5 a.m. Actually, wait an hour because I like to do some aquacise at the local YMCA. It’s $2 a class, but if you have an AARP card it’s only $1.50. You can never spend too much money on your own health. My Medicaid keeps my Centrum Silver costs down also. I wish my grandchildren would come visit me more often,” a wistful Colangelo said.

Sam Hinkie, president and general manager of the 76ers, said “Jerry just comes into my office ” unannounced at all hours of the day.

“I’ll be in the middle of something and in comes Jerry. It’s never for business or anything important, he just wants to see how I’m doing or if I want to go to the cafeteria for a cup of Postum. I don’t even know what Postum is.”

“And if I have to hear that story one more time about how basketball was first played with people shooting balls into a peach basket, I’ll probably kill myself.”