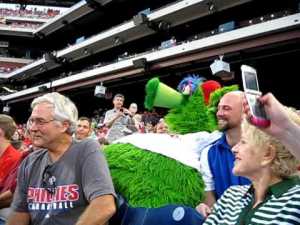 “The Phanatic has tormented the bald for years with his scalp shining routine. Sure, it seems like it’s harmless fun, but his capering throughout the decades has caused untold damages to thousands of men who suffer from thinning hair,” said Thomas Graham, president of the Coalition.

“Two weeks ago he shined my scalp for what seemed like hours in front of thousands of fans at Citizens Bank Park. Would he ever make fun of someone’s weight? Sexuality? I don’t think so, but it’s appropriate to make fun of my disease? It’s ridiculous, outrageous and scandalous.”

The 156 page lawsuit lists hundreds of incidents at CBP alone since it opened in 2004.

One such incident occurred on July 23rd, 2009, when the Phillies hosted the San Diego Padres. The Phanatic allegedly buffed Michael Commings bald head for a span of 25 seconds and then sat next to him rubbing his head for minutes more.

“Yes, the Phanatic did get the crowd to give Commings a round of applause and he was laughing, but on the inside I’m sure he was breaking. Mr. Commings, who is listed as a plaintiff in the suit, described the incident as ‘extraordinarily humiliating’ and has undergone years of intensive therapy as a result,” Graham said.

As of press time, the Phanatic responded to the allegations by smashing a bust of Graham’s head with a sledgehammer and sticking out his tongue several times, to the delight of the assembled reporters.