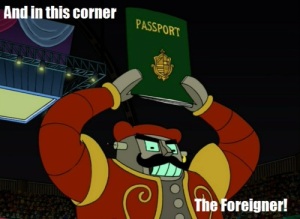 I’m not from here! I have my own customs! Look at my crazy passport!

Please listen to the song after the page break at full blast while reading. Yes it is obligatory, do not read until you listen to this at least 10 times to get in the proper mood to read an article from an ignorant American who is tired of being in Europe.

The Coggin Toboggan has gone to Europe. Coming at you LIVE (not live) from Copenhagen, Denmark.

Much better. Yes, it is true. I am currently in Copenhagen, Denmark for my job, earning money to actually keep this stupid site afloat (and to support my family, but that obviously comes second to the site).

While here I have not watched any TV (except for an NFL preseason game between the Chargers and Seahawks that was inexplicably being played in English) and I have no idea what is going on in Philadelphia sports at the moment. Sure I’ve checked twitter, but I swear I haven’t seen or ready anything else (except maybe ESPN) and I’m completely in the dark (except for what I’ve read on Crossing Broad).

So, why don’t I take a few stabs at what may or may not be going on in Philadelphia sports right now? Here are a few headlines and sentences of stories I believe are most likely to be happening right now in the city I miss so much.

Philadelphia, PA – After crumpling to the ground after a congratulatory handshake Saturday evening, an MRI Wednesday morning confirmed Sam Bradford had shattered his pelvis in 10 different places and would miss the remainder of the 2015-16 season.

Doctors were puzzled as to how a handshake could cause such an injury.

“He was on top of the world, a perfect preseason game….and then nothing. He’ll be in great pain for the rest of his life, but we are hopeful he will walk again.”

Philadelphia, PA – Citing a need to increase safety at the ballpark, Phillies representatives have announced their decision to install a net around outfielder Dom Brown to decrease the odds of him being injured by a fly ball.

“Have you seen Dom out there? Half of the time he isn’t paying attention or he has his glove off because he’s picking his nose. We feel this is the best decision for both him and our club to make sure he isn’t killed out there. It’s just common sense, really.”

Philadelphia, PA – Nelson Agholor was seen running laps during practice Wednesday afternoon as his head coach looked on. Several veterans on the field chuckled to themselves as they watched the first year wide receiver sweating it out with the extra work.

“Ooooh I know that look. Nelly obviously didn’t do a great job on his essay deconstructing Neitzsche’s theory of the Ubermensch. He probably confused the Ubermensch with The Last Man…man are you kidding me? That dumb motherfucker probably thinks the Ubermensch is a new taxi service. Shit, he’s got a lot of learning to do if he’s going to be on this team,” Fletcher Cox said as he watched the rookie run laps.

Kelly said culture was key for players to earn their spot on the roster, and if Agholor was going to have such an obvious take on the teachings of Nietzsche he should just “take his shit to the Redskins.”

So did I get any of them right? Let me know on Twitter.