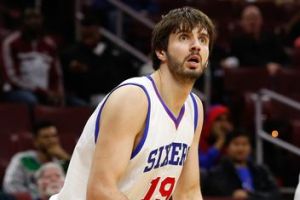 Philadelphia, PA – 76ers GM Sam Hinkie has yet to tell noted Philadelphia small forward and noted oddball Furkan Aldemir that he was traded to the Sacramento Kings last week for a second round pick.

The GM has been seen approaching Aldemir for the past several days after practice and before games, only to become unnerved and walk away when the unshaven Turkish athlete would make eye contact with him.

Hinkie’s most recent attempt came last night before the tip-off in Miami, but he was rebuffed when he noticed Aldemir was methodically sharpening a collection of scimitars he ships to each away game.

“Yes, he was traded last week to the Kings for a second round pick, but nobody has told him yet. It’s, well, it’s a difficult situation, I have to say,” Hinkie said, visibly flinching when he heard a loud noise come from outside of his office. “Is that him? Jesus, he freaks me out. The other day he brought a trashbag into the locker room and something was rustling around in it and it smelled awful. Brett tried to tell him to leave it outside, but he smashed it against his locker and the rustling stopped.”

Hinkie noted that he figured Aldemir would “get the drift” when he wasn’t listed on the 76ers active roster and hadn’t played a minute since last Thursday, but the athlete remains blissfully unaware of his fate.

“As long as he continues to be allowed to sleep in the locker room on a mat of straw, has his chamber pot emptied that he insisted upon in his contract, and the commissary has plenty of blood boar sausage on hand, I don’t think he’s ever going to leave this place willingly,” Hinkie said, shuddering.

As of press time, Aldemir was seen glaring at Hinkie, a small doll of Hinkie’s likeness on a stool next to him and a box of poisoned pins in his lap.