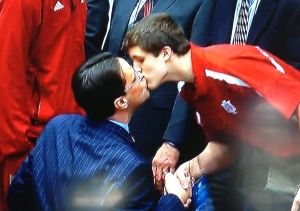 Easy there Tom, kids go on this blog!

Ladies, we heard you loud and clear at The Coggin Toboggan. Thanks for participating in our first ever Smooch Off poll between Tom Crean, University of Indiana mens head basketball coach, and Bill Belichik, head coach of the New England Patriots.

Bill put up a good fight, but the ladies cast their support behind Tom Crean smooching his son after an Indiana basketball game! And what’s not to like, am I right? That slicked back hair, the tender kiss, what lucky lady would not want to find themselves with Crean and his son!

Better luck next year, Bill. Maybe if you show a bit more passion with your daughter you might win the second annual Smooch Off poll at the CT!

Crean declined to comment on his victory and promptly blocked us on Twitter. Ooooh he’s a firey one!