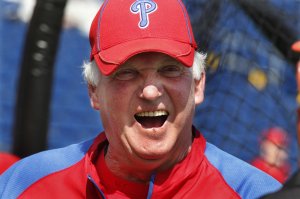 Charlie Manuel, the Coggin Toboggan salutes you. Not only are you our favorite Phillies manager of all time, you finally got that elusive Wrestlemania moment to truly cap off a fantastic career.

Relive Manuel’s road to Wrestlemania right here, and see how he made it to the greatest victory of his life over his former friend Ric “Nature Boy” Flair the past Sunday.

END_OF_DOCUMENT_TOKEN_TO_BE_REPLACED

Santa Clara, Calif. – Battered and bloodied, Charlie Manuel could only smile to himself as he raised a bottle of Coors Lite to the 90,000 screaming fans celebrating his victory of Ric Flair this past Sunday afternoon at Wrestlemania 31.

The former Philadelphia Phillies manager toasted the fans as he stood triumphantly on the top turnbuckle, Flair still laying motionless on the canvas below him after the 45-minute iron man match finally concluded after Manuel had slapped the Nature Boy’s patented Figure-Four leg lock on him for nearly 5 minutes.

“I told him Ol’ Cholly didn’t take kindly to being double crossed. Maybe Naitch will think twice next time before he decides to interfere in my business again,” Manuel said, blood pouring from a 3-inch gash across his left eyebrow.

END_OF_DOCUMENT_TOKEN_TO_BE_REPLACED

Philadelphia, PA – Hoping to avenge his loss at Royal Rumble after longtime friend Ric Flair betrayed him and eliminated him in the titular match, former Phillies manager Charlie Manuel was able to coerce a last-second match with the Nature Boy in Sunday’s Wrestlemania 31.

Manuel appeared on two days ago on WWE’s Monday Night Raw, carrying a handcuffed Ashley Flair out to the middle of the ring. Taking up the house mic, Manuel pointed a baseball bat at Flair’s daughter, threatening to “send her brains all through this ring” if he didn’t appear and accept Manuel’s challenge.

“Naw, I don’t want to do it, Naitch, but you’ve left me no choice,” He said, taking up a stance and readying the bat at her head. “You come out here right now and lets talk about what I want…a Hell in the Cell match at Wrestlemania. You brought this on yourself, Ric, now get out here.”

Moments before the bat could come crashing down on Ashley’s skull, Flair’s patented theme music blared throughout the arena, and the Nature Boy strutted out through the curtain and came to the ring.

“Now, now just hold on a minute Charlie. Lets not do something you’ll regret later,” Flair said, as he addressed the longtime Phillies manager. “You know and I know that you don’t have the stones to do that to Ashley. You were at her christening, you’re her godfather, you wouldn’t do that to her. Stop embarrassing yourself out here.” 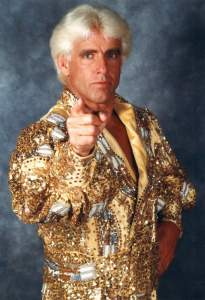 Manuel, seemingly defeated, slumped his shoulders and looked towards the mat. Perhaps buoyed by the chants of Charlie ringing out through the stands, the manager rose the bat and brought it down directly on Flair’s head, dropping the “dirtiest player in the game” into a heap.

“Accept the match or I’ll break your damn legs!” He screamed, tightening the hold, finally forcing the Nature Boy to agree to the Hell in the Cell match at WWE’s biggest pay per view of the year.

“That’s what I like to hear, I’ll see you on Sunday you son of a bitch!” Manuel yelled, dropping the microphone, as he walked out of the arena to thunderous applause.

The two will headline the event after the world heavyweight title match this weekend.