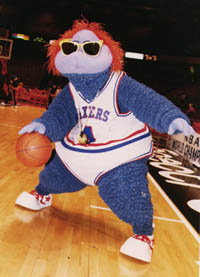 Big Shot, at the Spectrum in the early 90s. Was known mainly for scaring little children.

Big Shot has not been the mascot of the 76ers since the early 90s and hasn’t been seen in the area for over 20 years. Apparently, he’s outside of the WFC looking to kick someone’s ass.

The 76ers are not scheduled to play tonight. The Flyers are taking on the Winnipeg Jets at 7 p.m. at the WFC.

“I don’t know what he’s doing, or why he was here tonight, but I brought my son up to see him and he rebuffed us pretty good,” a shaken Tony Carchelleti told the CT. “He pushed my son down to the ground and continued to try and charge into the arena at each exit, only to be stopped by security each time.”

The usually jovial mascot was seen stomping up and down the WFC outdoors concourse, making obscene gestures to the building and remaining silent at all times.

At one point, an anonymous emailer said they saw Big Shot brandish a knife to someone inside the building, making exaggerated slashing motions to his throat.

“I don’t know what he’s doing here, but he is pissed off at something. What is going through that bastards purple head?” said Edward Cucholochio, head of security at the WFC. “All I know is if he gets in here I might have to order my guys to give him a bit of a wood shampoo with their billy clubs, if you know what I mean.”

The CT will update this story as soon as more information is available.