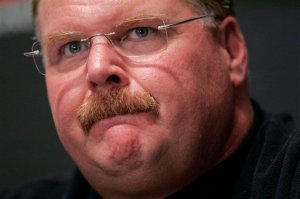 The CT was made aware of this staggering development when, earlier this week, the Philadelphia Inquirer launched the “Clean Plates” initiative, a comprehensive database of Philadelphia-area restaurant health inspections designed to educate city diners about the cleanliness of the establishments they visit.

When combing through the reports, the CT stumbled across several interesting health violation codes hidden among the more common violations.

For example, several South Philadelphia area restaurants, namely those around Lincoln Financial Field, were found to be in violation of “Code [46.111(a) ]: Allowing Coach Reid free reign of the walk in freezer without proper supervision,” and “Code [52.258(C) ]: “Failure to properly secure Coach Reid’s feed bag with high tensile straps, resulting in debris and spittle spraying throughout the dining area.”

These were among hundreds of violation codes designed with Reid in mind that could be found throughout the health inspection reports.

Wishing to remain anonymous, a local owner of an Italian eatery near the stadiums said Reid was a fixture at his dining establishment, costing him thousands of dollars in fines.

“Nights after losses were the worst. Coach would come in mumbling about how we needed to put him in a better position in the restaurant so he could succeed in consuming as much pasta as humanly possible,” the owner said. “Once, one of our waitresses slipped and fell on a half-eaten pork chop that had fallen out of Coach Reid’s mustache. We don’t serve pork chops. I have no idea where it came from.”

Disaster struck for the restaurant the night Reid was fired from his position as head coach. He arrived at the restaurant around 6 p.m. and didn’t leave until 4 a.m. the next morning, the owner reported. Despite numerous pleas from the wait staff to “take it easy,” Reid eventually passed out after consuming a final bucket of gravy, falling into a deep slumber atop a frightened bus boy, trapping him for hours.

When he awakened, he silently paid his bill and left, tipping a generous 15%.

“He’s a menace. At least he’s Kansas City’s problem now. Whenever the Chiefs come to town, though, we play it safe and close up for a few days.”