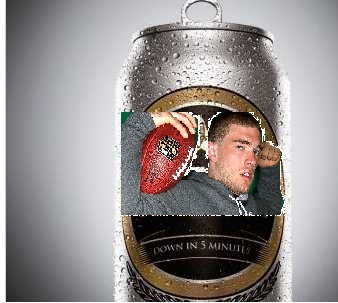 The local Conshohocken Brewing Company has made quite a splash today, as the brewery announced it would begin production on another beer brewed with a Philadelphia athlete in mind.

Beer aficionados and Philadelphia sports fans were abuzz this morning as the local brewery announced cans of its “Ghost Bear Golden Ale” would be available at several locations throughout Pennsylvania. Ghost Bear, of course, is the nickname of popular Flyers defenseman Shayne Gostisbehere.

Due to the brewing style and its specialized ingredients, the “Ertz Not-So Stout” will only taste good during the final four weeks of the season.

Here’s what a Conshohocken Brewing Company press release said about the new beer:

“Just in time for the holidays, Conshohocken Brewing Company announces a limited run of its ‘Ertz Not-So Stout,’ which will be available in locations near you this Sunday. We promise this stout will go down far easier than any beer you’ve ever experienced and will absolutely, 100% leave you wanting more. This will truly be the breakout beer of the season, and if not this year, absolutely next year. This is the year it will break out, believe us! So get your ‘Ertz Not-So Stout’ now, because you won’t be able to find it in September, October or November of next year.”

At press time, the brewery announced it would also begin brewing a special ale in honor of Carson Wentz, which will pour over the top of your own mug and directly into the mug of another bar patron.