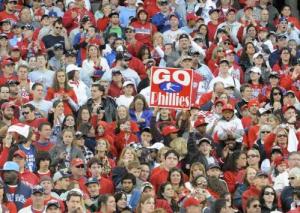 Philadelphia, PA – Fans at the Phillies, White Sox game Tuesday night confirmed that Thomas Wilkenstein, 46, deadbeat father to two sons Johnathan, 12, and Mike, 9, was really “going all out” for his boys by springing for three upper deck tickets for an out-of-division matchup in the final two weeks of a disappointing Phillies season.

Several attendees sitting near Wilkenstein and his clearly despondent boys noted that the deadbeat had bought them a bag of peanuts “to share” and his promises to buy them each a Phillies helmet sundae had gone unheeded and would likely end up unfulfilled.

“Really breaking the bank with these tickets I guess. I’m sure his sons are thrilled to see absolutely nobody they recognize on the White Sox,” Leandra Russell said, shaking her head. “Surprised he didn’t spring for standing room only tickets. Couldn’t wait until the Mets were in town or something?”

Those around the sad tableau hugged their children just a bit tighter as they watched Wilkenstein disappear from innings 4 to 6 as his youngest, Mike, asked his brother Johnathan repeatedly “where did dad go?”

Sources confirmed Wilkenstein reappeared before the beginning of the 7th inning, wreaking of beer, and without the Phanatic hat he had promised young Mike he was going to get him before the game ended.

“I heard him say they were all sold out. Yeah right, there were hundreds of them in the first merchandise store I walked by. This guy is a real piece of work,” Jamarcus Wilson said. “His youngest seemed to believe it, but the oldest just rolled his eyes and sighed really loudly. He knows what’s up.”

A mighty groan went up from the Wilkenstein’s section as they watched him forced his sons to leave in the top of the ninth to “beat the traffic.”