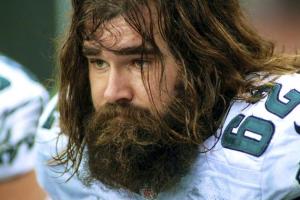 Is this the infamous Tits Smithington?

A reader forwarded us an email today that provided crucial details to an urban legend that has bounced around Philadelphia for the past year. The email lends credence to the legend of “Tits Smithington,” a go-getter of an employee at a local Philadelphia public relations firm that may have actually been Philadelphia Eagles center Jason Kelce.

The email described how a burly, good-natured employee had been hired at the firm in the fourth quarter of the 2015 fiscal year. The author said the employee was known around the office as “Tits Smithington” and frequently wore football cleats to work.

The dedicated reader who alerted us to Tits Smithington said several employees at the firm first suspected the employee was not who he said he was and was actively hiding his real identity:

Well, the first red-flag was that he never gave the human resources office his Social Security Number and refused to take any pay for the job, saying he was doing most of it pro-bono as a way to unwind from his stressful weekends. When asked what he did on the weekends that was so stressful, Tits would just wink at us and say he spent about eight weeks a year in South Philadelphia, eight weeks a year out of Philadelphia, and if things went right another few weeks after that participating in his other occupation.

Plus, it was obviously Jason Kelce. Tits Smithington is a blatantly false name and he answered to the name ‘Jason’ about 99% of the time without realizing it. He even wore his jersey to the office a few times and we heard him talking to “Coach Kelly” on his cell phone in the break room just about every day.

Nobody seemed to mind though. He landed the Jenkins account and always treated the office to happy hours on Friday. Fun guy. Hope he comes back soon.

So was Tits Smithington actually Jason Kelce? Signs point to yes, some signs point to no. I guess we will never know for sure.