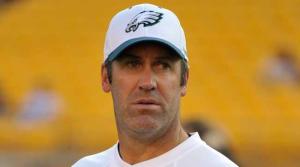 Philadelphia, PA – On the morning of his first draft, Eagles head coach Doug Pederson revealed some insight into his draft day strategy and what would go into the thought process for his first organizational picks.

Rather than attend the draft in Chicago and be in the war room with his assistant coaches and front office personnel,  Pederson said he would likely just mosey on down to the winding creek around back of his homestead and just “sit a spell.”

Either way, Pederson said there would be no way his tractor would be able to drive him all the way to Chicago after the days chores had been done.

“Nah I don’t think I’ll be going into the big city for that event. Just to much of a to do and too much flash for an old country boy like me. Think I’ll just take my old coon hound Blue and sit by the crick for an hour or two. Nothing better and a man shouldn’t want more’n that, if you ask me,” Pederson said.

Pederson said he would likely take a “whole mess of dem’ buttermilk biscuits” his missus was planning on making and have a nice “fricasee meal” while he listened to the water babbling on down the way.

If the mood would strike him, the head coach said he would even “drop in a line or two” to see if he could hook himself a catfish to fry up for breakfast the next morning.

“Should be a nice ol’ way to spend an evening. The sun going down over Blue Mountain ridge, some of those mockingbirds singing the day to sleep….not a care in the world,” Pederson said.

At press time, Pederson said he hoped the franchise would draft a player  who “knows a things or two about fixing thresher transmissions to see if we can get ol’ Betty humming again in time for corn season.”