The fireflies out in full effect.

Philadelphia, PA – The latest episode of WWE’s popular Monday Night Raw was found to be more realistic than the possibility of an Eagles Super Bowl victory by Phillip Thompson, 6, of Cherry Hill.

Thompson, who expressed legitimate anxiety that Roman Reigns would really be fired from the company if he did not defeat Sheamus in the night’s championship match, warned his father to temper expectations of the Eagles making a run in the playoffs, or even making the playoffs at the end of the year.

“I just don’t see it happening, really, they had a nice couple of games but I really think they don’t have much of a chance. Don’t be foolish, ” he warned his dad. “Wow, I hope Bubba Ray Dudley is okay, he went right through that table! I bet he broke his back and is going to be out for a long, long time. I wonder how he’s going to be back next week?”

Thompson reportedly chastised his father for being optimistic about the Eagles chances at a long postseason run and wondered why the referee of a Dolph Ziggler and Dean Ambrose match did nothing to stop Kevin Owens from interfering with the night’s Intercontinental Championship match.

“It’s like he didn’t hear Owens’ music as he came down the ramp, that is a blatant disregard for the rules, why didn’t security do anything to stop him? He completely stopped Ambrose from winning, he had it in the bag! I just don’t get it,” Thompson said. “But really, dad, I wouldn’t put to much stock in these last two wins. I don’t think they stand much of a chance against Arizona next week.” 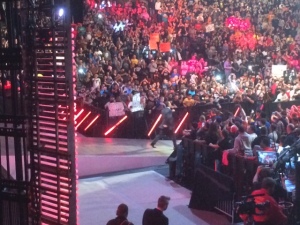 Vincent K. McMahon, marching down to the ring to deliver some swift justice.

At press time, Thompson was puzzled as to why Vincent K. McMahon didn’t just fire Reigns at the start of episode, but was quite clear on the fact that the Eagles stand no chance if they go against any of the NFC elite.