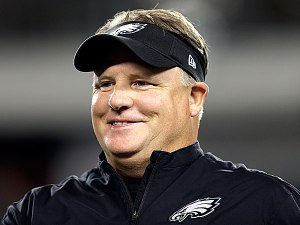 Foxborough, Mass – Following the improbable 35-28 victory over the mighty New England Patriots, Chip Kelly had to answer questions following the win on why he decided to limit or even outright bench running back DeMarco Murray for nearly the entire second half.

When asked head on why Murray sat in favor of veteran Darren Sproles and relative unknown Kenjon Barner in the biggest game of the year, keen observers noticed a faint smile creep up on the corners of Kelly’s mouth.

“We’re…umm….saving him for the playoffs. Yeah, that’s the ticket!” Kelly said.

Kelly continued, barely being able to contain himself.

“You know, Murray has been running well for us all season and you don’t want to pile up too many touches on one back. We’re right in the thick of things now, and we figured Murray just needed to have some of the tread on his tires saved for when we really need him,” Kelly said, putting a hand over his face.

“I mean, Murray has been SUCH an intricate part of the overall success of our team this year, we absolutely need to save him for our march to the Super Bowl…pfghhhhaghhahaha” Kelly said, barely composing himself as he heartily slapped his podium with a meaty hand and ducked behind it so nobody could see him.

Kelly’s shoulders shook up and down as the unmistakable sounds of laughter rang through the media room at Gillette Stadium.

“Oh mercy, that is good. Too good.” Kelly said, wiping a tear away from his eye before ending his conference.