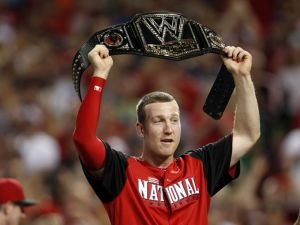 Todd Frazier, mere moments before he was stripped of his title belt (Photo Credit: USA Today)

Cincinnati, Ohio – In a shocking announcement this morning, first year Major League Baseball Commissioner Rob Manfred announced All-Star third basemen Todd Frazier of the Cincinnati Reds would be suspended for the remaining 86 games of the season.

Frazier was reportedly suspended for his part in the home run derby scandal, Manfred said. After checking his Twitter feed and re-watching the derby this morning, the new MLB commissioner noticed Frazier’s pitcher released several pitches before his previous hits landed on the ground, a clear violation of derby rules.

“Todd Frazier has tarnished the once proud tradition of the home run derby. He has forever ruined memories of other clean and fair participants, such as Barry Bonds and Mark McGwire, for his cheating efforts last night.”

“Frankly, he’s lucky he isn’t suspend for next season as well. Cincinnati breeds cheaters, apparently. I wonder if Pete Rose laid a hefty bet on the outcome of the derby? I’m sure he did…that sinner,” Manfred said, twisting the knife in deeper for Reds fans.

As for his brother, Charlie, who threw the illegal pitches, it broke this morning that a warrant for his arrest was issued by the state of Ohio for racketeering. He reportedly fled upon hearing the news and is now a fugitive from justice.

“Charlie Frazier may be armed and he is definitely dangerous. Please contact the authorities if you see him,” Manfred said.

As of press time, Marlana VanHoose, the blind teen who wowed the crowd with her rendition of the National Anthem, was awarded the HR Derby championship.