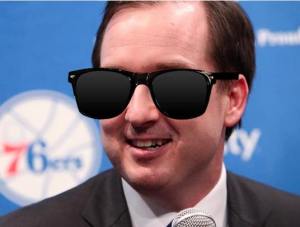 Sacramento, CA – Speaking from a sprawling chalet just outside of Sacramento, Sam Hinkie told reporters Thursday morning the decision to “nudge” Sacramento Kings Vlade Divac, vice president of basketball and franchise operations, into a better state of mind paid off greatly with the 76ers acquisition of Nik Stauskas for next to nothing.

“I’m happy Mr. Divac finally came around to our way of thinking. It’s so much better when things work out for everything, isn’t it Mr. Aldemir?” Hinkie said, handing 76ers power forward Furkan Aldemir an empty cappuccino cup.

Hinkie and Aldemir traveled to Sacramento this past weekend to discuss the availability of second-year guard Nik Stauskas with Divac. Trade discussions apparently came to an impasse on Sunday when Divac refused to provide the 76ers with this “favor.”

“You smooth son of a bitch, let me lay it on the line for you. Nik Stauskas never gets that trade. I don’t care how many Dago, Guinea, wop Greaseball Goombahs come out of the woodwork!” Divac reportedly screamed at Hinkie, whom calmly listened with Aldemir by his side.

Hinkie informed Divac he was of Irish-German descent, but smiled politely as Divac kicked him out of his home. As he walked away from the Kings compound, Hinkie silently nodded to Aldemir, who did not join Hinkie in his black Town Car. Aldemir returned to the Hinkie chalet the next morning, covered in blood.

Reports coming out of the Sacramento Bee are hazy, but what is known is on Wednesday morning, Divac woke up in his bed and noticed his silk sheets were covered in blood. He threw back the covers and found his prized racehorse, Khartoum, beheaded and placed next to him on his pillow. His screams echoed throughout estate.

Stauskas was traded to the 76ers less than 24 hours later for pennies on the dollar, much to the delight of 76ers fans.