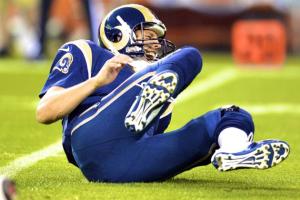 Philadelphia, PA – Pleased at Sam Bradford’s progress in OTAs so far, Chip Kelly told media at the conclusion of practice today that Sam Bradford is “right on track to be placed on injured reserve by week three.”

“Sam is hobbling around out there like he’s really got something to prove. I’m not one for making predictions, but he may even be on the IR by week two if he keeps on progressing,” he said.

Bradford participated in several drills yesterday afternoon, throwing to receivers in 7 on 7 sets, grimacing and clutching his shoulder after every throw longer than five yards.

Bradford even went hard down to the turf on several drop backs despite the drills being non-contact. His flimsy knee joints audibly cracked, ringing out through the NovaCare Complex like shotgun blasts. He had to be carted off the field several times at the conclusion of throwing drills and was unable to run the required four laps around the facility at the end of practice.

“He looked great on that cart even though he was physically unable to give the team a thumbs up as he was being driven off. We’re not too worried and believe me, he’s right on track for where we had him this early in the season,” Kelly said.

As of press time, five Eagles trainers were injecting saline solution into every single of a shrieking Bradford’s joint to enable the quarterback to walk to his car.