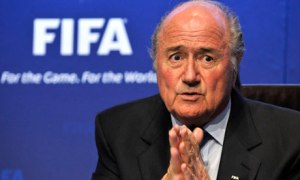 Philadelphia, PA – Upon hearing embattled and corrupt FIFA President Sepp Blatter had resigned from his position, Ruben Amaro Jr. was seen sprinting to his office as he frantically looked up the international country code for Switzerland.

“This guy has got the goods and we need to reach him RIGHT NOW,” Amaro could be heard screaming at a frazzled assistant, who was trying to find a contact number for Blatter. “He has the knowledge and the experience to be a perfect front office member for our organization, GET OFF YOUR ASS AND GET ME THAT NUMBER.”

Representatives claimed it was the most energetic and passionate they have seen Amaro since he inked Chad Billingsley to a minor league contract earlier this year.

Amaro smashed his second generation Blackberry against his desk when his assistant could not reach Blatter by telephone.

“Get his email address, we need him in this organization and we NEED HIM NOW. I’ve never been more sure of something in my entire life. Fans will love this guy, offer him anything he wants, JUST DO IT NOW!”

As of press time, Amaro had reached a confused Blatter and was trying to explain the rules of baseball to the 79-year-old corrupt president.

UPDATE: Amaro successfully inked Blatter to a lifetime deal, worth $5 million for every year Blatter serves in the front office. He then named Blatter as his successor as GM.