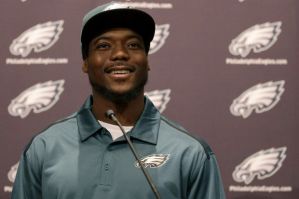 Byron, my god, what are you doing?!

Philadelphia, PA – After carefully weighing his options and mulling over the pros and cons, Byron Maxwell, new Eagles corner back, guaranteed the Eagles would appear in the Super Bowl after participating in one OTA.

Maxwell made his statement around 12:15 p.m. this afternoon.

“I thought it over, weighed the risks of such a statement, and performed a univariate analysis and decided this was definitely the best course of action,” he said prior to today’s OTA workout. “So I’ve really thought this out and I’ve been mulling over my spreadsheets since yesterday. This is the correct course of action, so lets not think this is a fly by night, off the cuff guarantee, ok?”

Maxwell seemed confused when the gathered media started to buzz after his statement.

“It’s just my opinion, lets not go too crazy with this. I really don’t see how this is much of a story. By me saying this, right now, it will have no effect on the outcome of our upcoming season. Why is everyone writing this down? It’s not a big deal, guys, seriously,” Maxwell said, pausing to check his phone which was buzzing wildly.

“5,378 Twitter notifications….what the hell?” Maxwell said, before turning away from the reporters and heading over to practice.

As of 12:17 p.m., Maxwell’s statement had appeared on over 3 million sports websites across the country and 87,000 think pieces had already been published decrying his statements.

As of press time, Vince Young silently pumped his fist in exuberance when he checked his phone, realizing his “Dream Team” declaration in 2011 would finally be forgotten.