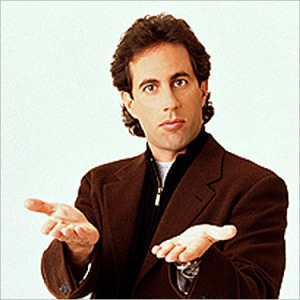 Jerry Seinfeld checks in with the Toboggan every now and again to provide a hot take about Philadelphia sports, the way only a neurotic Jewish comedian can. For best results, please read the following in a stereotypical Jerry Seinfeld 90s voice.

But seriously, make a decision on this kid and end it! He’s racked up more frequent flyer miles from Philadelphia to Reading than Governor Christie has charged cheesesteaks to the New Jersey taxpayer. Am I crazy, or is that a lot of cheesesteaks?!

Just play him or get rid of him Amaro, we’re serious. Enough of this kid getting yanked around each year, lets see if he can swing the stick or not. Look to the cookie, Elaine, look to the cookie!

All of this coming up and down reminds me of Larry David in the open mic scene in New York back in the early 80s. He’d come with me to the Chuckle Hut, high on cocaine and gefilte fish, and agonize for hours on whether he’d take a stab at this comedy thing. I’d have to convince him to come out of the mens room to perform for his five minutes, which would just lead to him drooling on the microphone in a cocaine and bourbon induced stupor.

On a related note, it’s how he came up with the gag of Kramer drooling on the gym floor after getting a strong shot of novocaine and hurting Jimmy. Except in real life, one of the talented young comics slipped on Larry’s drool and actually became PARALYZED from the waist down and never did comedy again! Believe me, the gag was much funnier when we did it on Seinfeld years later and much less tragic.