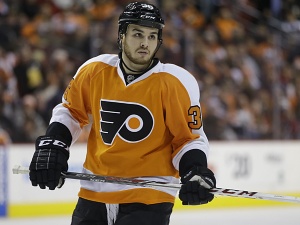 “Yeah, it’s umm…umm….it’s going to be really tough….oh god guys give me a few seconds here,” Giroux said, trying not to break down in fits of laughter as he tried to form a coherent response. “Woo….just have to get through this. Why are we even talking about this? I mean, how are we EVER going to get by without Zac? I mean, 4 points and a -7 in 36 games this season, yeah, who is going to be able to put up those numbers.”

Giroux audibly chortled several times during his address to the press, his face turning beet red during several moments as he tried to stop from laughing.

Giroux finally couldn’t contain himself and laughed for three-minutes straight after Sam Charchidi asked him if any of the younger players on the team would be able to fill Rinaldo’s shoes for eight games.

“I think Frank Bialowas could strap on skates at this point and at least hover around a -7, and I heard he couldn’t even skate backwards,” Giroux said, punctuating his response by flipping off Charchidi for 25 uninterrupted seconds.

The last time Giroux had such a difficult time getting through a press conference was when Randy Miller asked him if he thought Dan Carcillo was the “heart and soul” of the 2009 roster.