We have eyes and ears everywhere in Washington, D.C., so it was only a matter of time until President Trump’s “Celebration of America” program leaked and was placed in our grubby little hands by one of our various little birdies flittering and fluttering around the halls of the White House.

After realizing only a handful of Eagles could stomach being within a 100-yard proximity of Trump, the commander in chief abruptly cancelled the Eagles planned visit to the White House this afternoon for their Super Bowl LII victory.

His reasons? The usual “let’s throw some shit about the National Anthem and NFL protests against the wall” to see what sticks.

The Philadelphia Eagles Football Team was invited to the White House. Unfortunately, only a small number of players decided to come, and we canceled the event. Staying in the Locker Room for the playing of our National Anthem is as disrespectful to our country as kneeling. Sorry!

We will proudly be playing the National Anthem and other wonderful music celebrating our Country today at 3 P.M., The White House, with the United States Marine Band and the United States Army Chorus. Honoring America! NFL, no escaping to Locker Rooms!

Sounds like a fun event! I’m sure nobody will be disappointed that they get to see jowly Trump in all his pasty glory trudging across the White House lawn instead of their Philadelphia Eagles heroes.

If you’re planning on going down to D.C. for the “big” celebration this afternoon, here’s the leaked series of events for the program.

2:45 p.m. to 3 p.m. – White House aides convince Trump to not cancel the event after only 20 people show up outside of White House gates.

3 p.m. to 3:15 p.m. – Trump welcomes “true Americans” to the celebration. United States Marine Band plays National Anthem. Trump does his best to silently mouth along to 25% of the lyrics.

3:15 p.m. to 3:30 p.m. – Trump loudly and proudly sings along to every word of Kid Rock’s “Bawitdaba,” tries to air guitar during the solo bridge, promptly pulls hamstring.

3:30 p.m. to 4 p.m. -Winded Trump says he just needs to sit down for a few minutes. Aides scramble to find his reinforced steel beach chair.

4 p.m. to 4:30 p.m. – “Just give me another minute, I’ll be right with you,” Trump assures crowd, breathing heavily as slumps down into chair. White House doctors scurry over to bloated mass to check vitals.

5 p.m. to 5:05 p.m.  – Trump is distracted by tweets from Eagles Head Coach Doug Pederson, sent from a hot tub at the NovaCare Complex, thanking the “Commander in Chips” for giving him a free day to draw up more plays for upcoming Super Bowl defending season. Video of Doug Pederson giving the “jerk off” motion when referencing the planned White House and President Trump visit is retweeted millions of times.

What a day to celebrate America!

What better way to remind Trump of the Eagles glorious season than buying Eagles Super Bowl merch from the banner below? That’s what real Americans do. 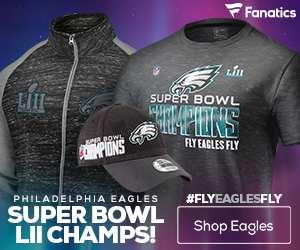