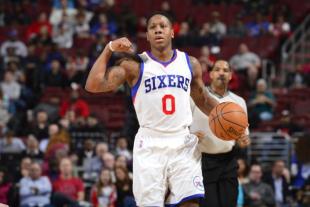 Philadelphia, PA – Isaiah Canaan, veteran shooting guard for the Philadelphia 76ers, has told close friends and relatives that he is concerned the organization may try to trade him on draft night to gain another top-five pick.

Canaan has expressed anxiety to his closest group of confidants that the 76ers would decide to focus on the future and not want to win now, forcing their hand to trade the shooting guard to either Boston for the third overall pick or Phoenix for the fourth pick.

His concerns have mostly fallen on deaf ears and have been met with snickers behind his back when he leaves a room.

“I love him, he’s my baby boy, but he averaged 11 points last year and shot 36% from three. Yeah, that’s a real cornerstone player for a franchise looking to rebuild,” his mother, Nicole Martin, sarcastically said as she rolled her eyes.

“If he tells me again that Phoenix had scouts in Philadelphia last year to watch him play I’ll lose it. I just will,” she said.

Canaan, whose trademark move last season was driving wildly into several encamped defenders and either chucking up an off-balance shot or dribbling the ball off of his foot out of bounds, has been looking at real estate in Boston or Phoenix to “just be on the safe side” if something does happen tonight.

Several of Canaan’s friends do not share his concern.

“Is this mother fucker serious? He’s got nothing to worry about. He could go out tonight and put a down payment on a Philadelphia apartment and sign an iron-clad 30-year lease. He’s going nowhere,” close childhood friend Remmy Thompson told reporters Thursday morning.

“Please, nobody is going to trade for his sorry ass.”

At press time, Martin shook her head and looked to the heavens as her son once again noted that the heat in Phoenix is “more of a dry heat” than Philadelphia, which would be nice.