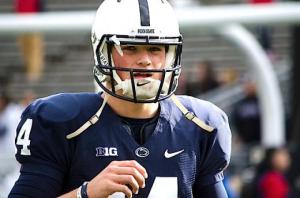 Indianapolis, Indiana – Penn State quarterback and NFL prospect hopeful Christian Hackenberg expressed extraordinary confusion at the conclusion of the combine interview, as the 21-year-old athlete said he was only asked questions about the major motion picture “Gods of Egypt,” which opened nationwide today.

The Penn State product could only shake his head as he readied himself for the rest of the weekend, hoping the movie would not come up  again.

Adding to his confusion, the modestly reviewed movie has absolutely nothing to do with the game of football and takes place thousands of years before the sport was even invented.

“What the fuck? I had no plans on even seeing that stupid movie. I guess I should see it tonight in case anyone wants to talk to me again. I really don’t want too, it looks terrible.”

Hackenberg recalled several questions asked of him during the interviews:

“How am I supposed to answer when someone asks me if I see myself more as a ‘Set’ or a ‘Horus?’ What does that even mean? It has nothing to do with football at all. I don’t even know who those people are. Are they in the movie?” Hackenberg asked, in reference to the movie’s two lead characters played by Nikolaj Coster-Waldau and Gerard Butler.

At press time, Laremy Tunsil, an offensive tackle from Ole Miss, said scouts only asked him questions relating to “Eddie the Eagle.”