The man, the myth, the legend, Pete Gas.

Pete Gasparino aka Pete Gas of the Mean Street Posse and  friend of the Coggin Toboggan has a BOOK FOR SALE on Amazon about his life, his experiences wrestling for the WWE during the Attitude Era, and his career defining interview with The Coggin Toboggan earlier this year (probably).

His book, Looking at the Lights: My Path from Fan to a Wrestling Heel, can be found on Amazon (here’s the link) or at a book store near you. It will be released on March 7, 2017, but you can pre-order now.

Even though he dodged our hard hitting question about his favorite Val Venis film, Pete was a cool guy and one of the more open people we’ve interviewed on this site. Gas was definitely a better interview than those TIGHT LIPPED comedians we have on every now and again. Jesus Christ, I’m not asking you to give us material, just how about answering our silly questions with more than ONE SENTENCE. You’re supposed to be eloquent and our readers want to know what your favorite Tecmo Super Bowl team was….DON’T SASS ME.

END_OF_DOCUMENT_TOKEN_TO_BE_REPLACED 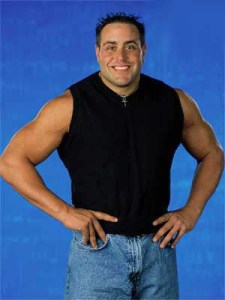 Pete Gasparino, aka Pete Gas, wrestled in sweater vests and khakis as part of the Mean Street Posse for three years with the WWE during the heyday of the attitude era. Gasparino and friend Rodney Leinhardt were brought into the organization by Shane McMahon, son of WWE Owner Vincent McMahon, and paired with independent wrestler Joey Abs to form “The Mean Street Posse.”

Based partly on Gasparino and Leinhardt’s real life friendship with Shane, the Mean Street Posse wrestled for WWE from 1999 to 2001, feuding with Hall of Famers like the APA and with Crash Holly over the WWE Hardcore Belt.

Oh sweet Jesus did I hate the Mean Street Posse when I was 15 and firmly entrenched in professional wrestling. Their smarmy attitudes, their ring gear, their oddly catchy reggae infused entrance theme, they were the WORST.