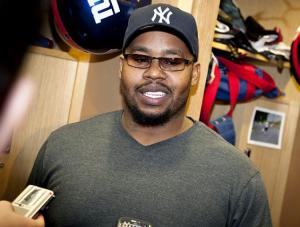 Philadelphia, PA – Ex-Philadelphia Eagles lineman and noted mental patient Shawn Andrews took to his twitter Wednesday afternoon and posted a number of Tweets questioning the legitimacy of the alligator attack that killed a 2-year-old tourist in Orlando earlier this week.

Andrews claimed President Barack Obama approved the funding and staging of the attack to enable the U.S. Government to strengthen alligator control laws throughout the country and eventually take away all alligators from law abiding citizens.

“The government has been trying to take alligators away from good, hardworking U.S. citizens for years. This is just another way for Obama to introduce more stringent alligator-control laws, despite our country’s constitution plainly defending every American’s rite to own and operate alligators,” Andrews told reporters this morning.

The ex-professional football player posted the following on his twitter feed this week (he really did post this):

The sheriff dude said the 2yr old child's body was found completely in tact, from an alligator attack!! In what world?? SMH

He went on to re-tweet a message from another Twitter user, detailing the attack hoax:

Andrews opened up on his theory from his centralized bunker located deep within the Ozark Mountains.

“Just follow the money. Obama wants to create so much paranoia about alligators that he wants to completely rescind the Constitutional amendment that allows every American citizen the right to an alligator. He wants to persecute alligator owners. Not on my watch,” Andrews said.

Andrews, who owns three American alligators and four Chinese alligators, said he practices safe alligator use and the U.S. government can take away his alligators when they pry them from his cold, dead hand.

At press time, Andrews was critically wounded by one of his own American alligators after it accidentally bit him in his face when he was trying to clean it.