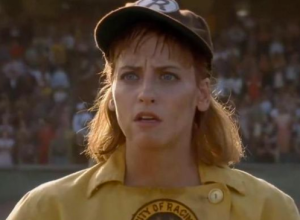 The face of jealousy.

Yesterday I published a very thorough review of “A League of their Own” and the coaching decisions therein. In this post, I floated a theory that Dottie Hinson dropped the baseball during the climactic collision in the final inning of the championship game with her sister, Kit Keller, who had been traded earlier in the year.

Of COURSE she dropped it on purpose. Dottie was the best player in the league, was married to Bill Pullman, and was secure enough to quit after one season of dominating the All American Girls Professional Baseball League.

Kit, on the other hand, had nothing. Constantly living in the shadow of her more accomplished big sister, she had EVERYTHING riding on that championship game. So what did Dottie do? Drop the ball on purpose to give her younger sister a moment in the sun.  What a role model!

I floated this theory to Lori Petty (aka Kin Hinson aka Tank Girl) yesterday on Twitter.

@loripetty Geena dropped the ball on purpose, didn't she? https://t.co/9Ip16qefzE

Come on, even Lori would have to agree, right?

Damnit Lori. You thwart me at every turn.