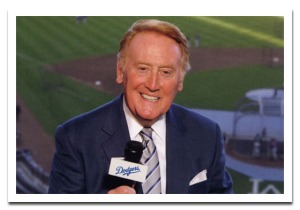 Philadelphia, PA – Vin Scully, a legend in broadcasting, eloquently ripped the Phillies play into shreds last night, almost as if he was offended the worst team in baseball had dared desecrate the game he has devoted over six decades of his life.

“It’s time for Dodger baseball! Hi, everybody, and a very pleasant good evening to you, wherever you may be. Tonight our beloved Dodgers will take on the Philadelphia Phillies, an affront to everything we love about this grand old game, in first of a four game series,” Scully said to open the game.

The 87-year-old announcer, known for his soft, calming voice and entertaining anecdotes, continued to share his displeasure to the thousands at home watching the game.

“Jimmy Rollins, I can only imagine how this young man is feeling right now. His first game against the team he played 15 seasons for, what a joy it must be for him to see the franchise in such disarray. Jimmy Rollins, the happiest man in the ballpark tonight, that’s for sure,” Scully said.

As the game slogged on for more than 4 hours, Scully became more and more irate with even the sight of the Phillies on the field.

“I’m 87 years old, 66 years in this business, and I cannot believe the dreck I am forced to watch tonight in Chavez Ravine. I’m too old to waste my time with John O’Sullivan and Cody Asche. Strike on the outside corner, 0-2.”

Scully even launched into one of his trademark analogies to describe the nonsense he was watching on the field.

“My good friend, Ryne Sandberg, former Phillies manager as of two weeks ago was talking to me this afternoon and told me managing the Phillies was the worst experience of his life. I’m wondering how he didn’t throw himself under the Phanatic’s ATV far sooner. That’s a ground ball to second base, and to nobodies surprise Hernandez botches a surefire double play to extend the Dodgers inning. What a piece of garbage,” he said.

After the Hernandez error, Howie Kendrick singled and scored Rollins for the go-ahead run.

“Like flies to shit, the Phillies cannot stay away from failure.”

Scully did not speak for the next five minutes and only sighed loudly into the microphone as the Phillies floundered in their top half of the inning.